This page describes how to make a LEGO robot that follows lines and makes turns at intersections as instructed. It's meant to be a basic introduction to the Pixy2's line following abilities.

If your line drawing has an intersection, you can tell your robot always turn left or always turn right (for example) by “hard-coding” the Turn Angle. With the program stopped, try setting the Turn Angle to -90 degrees.

-90 degrees is a right turn according to the diagram below. 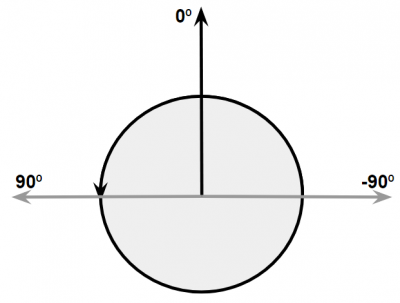 Can you extend this demo to make turns based on barcodes? Barcode images (including roadsigns!) are available here.