Pixy2 can be used in combination with different hardware platforms, which makes it such a versatile and powerful device. Among these platforms are widely used platforms like Raspberry Pi and LEGO Mindstorms EV3. If you like to program in Python or MicroPython on any of these platforms, this is your resource to find out how.

Each platform has its own characteristics. The way of communicating between Pixy2 and the platform is an important one. For instance, using Raspberry Pi communication goes via USB. If your using LEGO Mindstorms EV3 then you have to use I2C serial communication and connect Pixy2 with the cable delivered with the LEGO version of Pixy2.

In this tutorial we will describe the following platforms:

This tutorial belongs to Pixy2 and Pixy2.1. If you own the previous Pixy, go to the chapter “Pixy for LEGO Mindstorms” in the tutorial over here, written by one of our customers which explains how to use Pixy on LEGO Mindstorms EV3.

If you like to program in Python3, then ev3dev is your best choice. Ev3dev is a Debian Linux-based operating system that runs on several LEGO® Mindstorms compatible platforms including the LEGO® MINDSTORMS EV3 and the Raspberry Pi-powered BrickPi and PiStorms. Just write the image of the ev3dev operating system on a SD-card, put in in your EV3-brick and turn it on. The ev3dev website gives a clear explanation how to use it. To follow this tutorial you need a basic understanding of ev3dev.

A plus for using MicroPython on your EV3 is that it runs a lot faster. If you want to use MicroPython then PyBricks is the best solution. PyBricks is approved by the LEGO Group and you can find downloads on their LEGO Education website. If you like to use the latest version of PyBricks, you better download it from the PyBricks website. Follow the instructions on the EV3 installation page.

To make programming more easy for you, we developed a Python API to use Pixy2 on the EV3. To use this API you have to install module pixycamev3. The same API can be used with both Python3 and MicroPython. The only difference is the way you install the API. When installed, using our API with Python3 is exactly the same as with MicroPython. But first you have to setup Pixy2.

First configure Pixy2 to communicate over I2C. For this you can use the PixyMon tool. You can find a full reference of PixyMon here. Connect Pixy2 with the USB cable to your computer and run PixyMon. In PixyMon open the configure dialog and select the Interface tab. 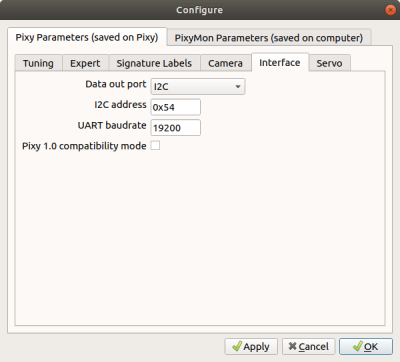 Set Data out port to I2C and I2C address to 0x54 (or any other address you like). Save your settings, close the configure dialog, close PixyMon and detach Pixy2 from your computer.

This Python API works both with Python3 and MicroPython. There are two ways you can walk to use the API:

At the moment this method only works for Python3.

First login to your EV3 using ssh. Run the following command in a terminal window on your computer:

where robot is the default username in ev3dev and xxx.xxx.xxx.xxx is the IP-address of your EV3. You will be asked for a password. The default password is maker. Be sure to use you're own combination of username and password if you changed the default in ev3dev.

When logged in to EV3, you can install the API package on your EV3 with:

This takes about four minutes on the EV3. pip is not installed out-of-the-box on ev3dev. You can install pip with:

Beware this takes about 18 minutes on the EV3! But you can use pip later on to install other python packages when needed.

When package pixycamev3 is installed you're ready to program! Go to the next paragraph Using Python API.

2. Adding the API to your project folder

This method works for both Python3 and MicroPython.

In your project folder create a new folder pixycamev3. Visit the repository on Github. Add the file pixy2.py to your folder pixycamev3. The easiest way is to open this file in Github and click on the Raw button right above the code window. Then select all text of the file and copy it to a new file named pixy2.py in your pixycamev3 folder.

The file pixy2.py works for both Python and MicroPython. When you copied the file you're ready to program!

The main object you will need is the Pixy2 class. This object contains all the properties and methods you need to use Pixy2. So first you have to load this object from the pixy2 module: