This page describes how to make a LEGO robot that chases things, like a ball. It's the same robot and program that's used in the Pixy LEGO video. This robot and program is a good launching point for other projects, and it's a good introduction to PID control, which is used throughout robotics and engineering in general.

What's going on in the track program?

to adjust the heading of the robot by using a PID controller. 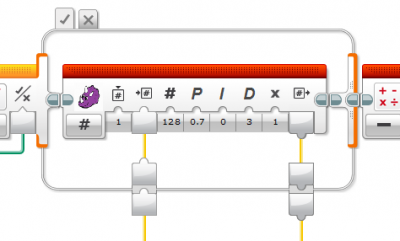 That is, the X centroid output of the Pixy block ranges between 0 and 255, depending on where the detected object is in Pixy's image. The “center pixel” is therefore 128. The PID controller tries to move the motors such that the detected object is always centered in the image. It does this by comparing the X centroid value to 128 (the PID controller's Set Point input).

Some notes on adjusting the PID gains

The appeal of the PID controller is it's flexibility. By adjusting the three gain values, one for proportional, one for integral, and one for derivative, lots of different systems can be controlled. So what's up with the PID values? How were they chosen?

These were “tuned” by experimentation. You can tune the PID loop yourself. In fact, it's a good way to familiarize yourself with PID control.

Go ahead and set all of the PID gains to 0. That is, click on Proportional input of the PID block and set the value to 0. Do the same for the Integral and Derivative inputs. Now all of the PID gains are 0. You can try to run the program now. And if you guessed that your robot won't move, you're correct!

The proportional gain “does most of the work” as they say, so tuning should begin by adjusting this value. Start with a small value of 0.1 and run the program. Notice how the robot is now very slow and sluggish. That is, when trying to track the object (which you're moving around) the robot seems to be trying, but it's heart doesn't seem to be into it. This is telling you that your proportional gain is too small.

Try settnig the proportional gain to 1.0 and run the program. You might notice that the robot does a shimmy after it faces your object. In other words you move the object quickly, and the robot responds by turning to face the object, and instead of stopping when it faces your object, it keeps on going. It overshoots. In fact, it may overshoot several times before coming to a rest, finally facing your object like it was programmed to do. This is oscillation, and it's a very common problem.

Our goal is to have our robot that tracks the object quickly, but without oscillation. This is usually the goal, but you may want a robot that oscillates or is sluggish. It's all up to you! 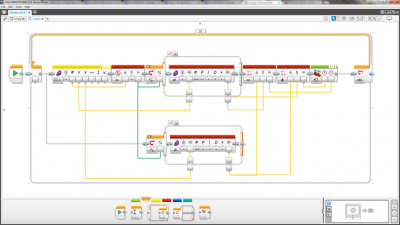 To run the chase program:

What's going on in the chase program?

Now consider that Pixy is angled slightly such that it is looking downward. This allows your robot to use a simple distance-measuring technique. Assuming the object of interest is resting on the ground, if the object is higher in the image, it is farther away from Pixy. If the object is lower in the image, it is closer to Pixy. In fact, you can estimate the actual distance by performing a simple calculation: distance = constant * 1/(1 + Y Centroid). You just need to figure out the value of the constant by doing some simple calibration with a known distance. Anyway, by choosing the value of 150, we are choosing the lower part of the image, or when the object is relatively close. You can change this value if you like. In particular, if you lower the value (to 100, for example), the robot will stop when it is farther away. If you raise the value (no greater than 199 though!), the robot will stop when it is closer.

If you've ever driven a tank, these equations probably make sense. But we're interested in the “inverted” equations. We want expressions for the leftwheel and the rightwheel in terms of rotation and translation. That is, we already know how we want our robot to rotate and translate – these are the outputs of our PID controllers. So rotation and translation are our knowns. Our unknowns are leftwheel and rightwheel. Using some algebra, we get the inverted equations.

If you look at the program, these equations are implemented in the math blocks that feed into the Move Tank block. The divide-by-two's are missing, but since these are just multiplicative constants (ie multiply by one-half), they end up being taken up in the PID gain values when the gain values are chosen (tuned). (How convenient!)

Some notes on the PID block

But by making the PID controller a block, we hide the implementation details. These details are simple though, and can be summarized with a few simple expressions.

Using these expressions as a guide, you can try creating your own PID block in the LEGO EV3 programming environment.

So think about what you want your robot to do, then do it! (And by all means tell us about it! support@pixycam.com)